The Blue Mountains were likely named for the widespread blue Strobilanthes flower or the smoky haze enveloping the area.

This area was long occupied by the indigenous tribal peoples of the Toda, Kota, Kurumba and Irula . The Todas occupied the Ooty area and the Kotas the Kotagiri area. The Badagas appeared much later, migrating from the Mysore Plateau, in 1550 C.E.

The Badagas were the agriculturists in the district, cultivating traditional crops such as samai, batha, ragi. Under British influence they cultivated English vegetables and later moved on to tea.

Unlike elsewhere in the country, no historical evidence is found of a state on the Nilgiris or that it was part of any ancient kingdom or empire. It seems always to have been a tribal land. The Toda had small hamlets “mund” across most of the plateau. The Kota lived in seven dispersed villages "kokal". The Badaga had 435 villages "hatti" in central and eastern parts of the plateau. Local place names are derived mainly from the dominant Badagu language, e.g., Doddabetta, Coonoor, Kotagiri, Gudaluru, Kunda, Ootacamund etc.

In 1818, J. C. Whish and N. W. Kindersley, assistants to John Sullivan, then Collector of Coimbatore, visited Ooty and submitted a report to him.

Sullivan camped at Dimbhatti, north of Kotagiri in January 1819 and was enthralled by the beauty of the place. He describes this place as little Switzerland The Toda ceded that part of the town to Sullivan and in May 1819, he began to build his bungalow at Dimbhatti.

Ooty served as the summer capital of the Presidency, it was visited by British officials during the colonial days as a popular summer resort. Soldiers were sent to nearby Wellington to recuperate. Wellington is the home of the Madras Regiment of the Indian Army. After Independence, it developed into a popular hill resort.

Kotagiri remained the first choice for British men wanting to settle in hills. The area was of a pleasant climate of neither extreme unlike Ooty or Coonoor, which were colder. The plateau also had more of a warm wind than rain through the year. 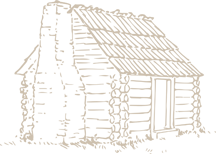 The Todas live in small hamlets called munds. The Toda huts, which are of an oval, pent-shaped construction, are usually 10 feet high, 18 feet long and 9 feet wide. They are built of bamboo fastened with rattan and are thatched. Each hut is enclosed within a wall of loose stones. The front and back of the hut are usually made of dressed stones (mostly granite). The hut has a tiny entrance at the front – about 3 feet wide, 3 feet tall. This unusually small entrance is a means of protection from wild animals. The front portion of the hut is decorated with the Toda art forms, a kind of rock mural painting. Thicker bamboo canes are arched to give the hut its basic pent shape. Thinner bamboo canes are tied close and parallel to each other over this frame. Dried grass is stacked over this as thatch.