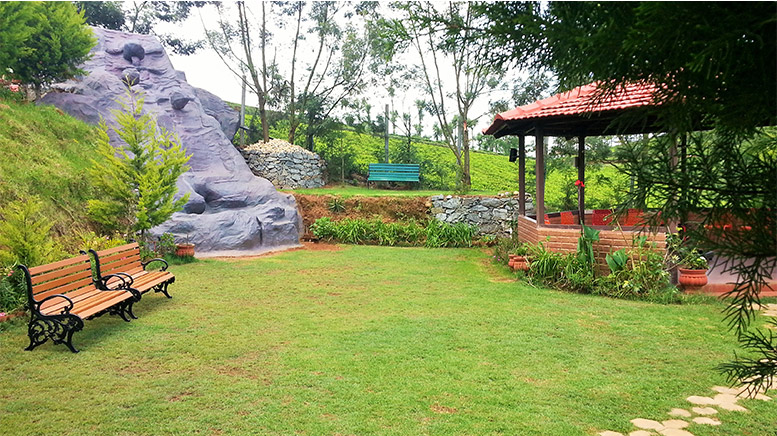 The district has an area of 2,552.50 km2.The topography is basically hilly, lying at an elevation of 1000 to 2,600 meters above MSL. The district is bounded by Chamarajnagar district of Karnataka to the North, and Wayanad, Malappuram and Palakkad districts of Kerala to the West, Coimbatore district of Tamil Nadu to the South, and Erode district of Tamil Nadu to the East. In this district the topography is rolling, with steep escarpments. About 60% of the cultivable land is slopes ranging from 16° to 35°. The rolling hills of the Downs look quite similar to the Downs in southern England, and were formerly used for such activities as hunting and picnicking. The elevation of the Nilgiris results in a much cooler and wetter climate than the surrounding plains, so the area is popular as a comfortable retreat and is good for tea cultivation.

During summer the temperature reaches a maximum of 25 °C and a minimum of 10 °C. During winter the temperature maximum is 20 °C and the minimum 0 °C. The district regularly receives rain during both the Southwest Monsoon and the Northeast Monsoon. The entire Gudalur. and parts of Ooty get rain from the Southwest Monsoon, while a part of Ooty and the entire Coonoor and Kotagiri get rains of the Northeast Monsoon. The principal town of the area is Ootacamund, also known as Ooty or Udhagamandalam, the district headquarters. It has several buildings designed in the British style, particularly the churches, many of which were designed by architect Robert F. Chisholm. The other main towns in the Nilgiris are Coonoor, Kotagiri, Gudalur and Wellington.

Three national parks protect portions of the Nilgiris. Mudumalai National Park lies in the northern part of the range where Kerala, Karnataka, and Tamil Nadu meet, and covers an area of 321 km². Mukurthi National Park lies in the southwest part of the range, in Kerala, and covers an area of 78.5 km², which includes intact shola-grassland mosaic, habitat for the Nilgiri tahr. Silent Valley National Park lies just to the south and contiguous with those two parks, covering an area of 89.52 km². Outside the boundaries of those parks, locals have cleared large tracts of the native forest to graze cattle, and for plantations of tea, Eucalyptus, ganga and Acacia.